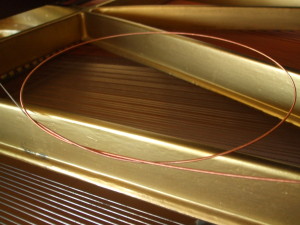 This week in the studio, we’ve been exploring inside the piano!

As studio members will know, I’m currently taking care of Gustin House’s wonderful Knabe.  (I looked up its serial number on the internet, it looks like it was built in 1914.)  The piano tuner came to replace a string (C3, or the C below middle C).  Since strings come in pairs, he put in a set,  This means I had one of the old strings left over after to show to students.

We looked inside the piano and explored the mechanics of the piano.  The string replaced was one of the lover notes, one of the ones wrapped in copper wire.  Also, we had an example of a hammer and some dampers.  It was fun to learn a little bit at the piano mechanics.  Exploring the mystery of how a piano works has been an fun activity for students in lessons this week!

It’s been a fun few months for performing!

In June, I had the pleasure of performing at Gustin House for their “Art and Artists of our Land” concert, featuring Canadian music.  I played a piece called Adagio by local composer Ewan Coxworth.

The same evening, I performed at the Strata Festival.  The piece we played here was Dream Sequence by Janet Gieck.  This piece was commissioned by the Galliard Foundation, a group I am co-founder of, and currently, co-artistic director.  This group recently started their fifth season.  It was a pleasure to play some piano music as a part of the first Classical Variety Night concert of a new year of music making.

The Polyreeds also had some performances recently – we played at Primrose Manor and the Amy McLure place this July.

Thanks to all my fellow performers for these events, it was a pleasure to play with you all, and you were awesome to work with!