The Brainy Foodbank challenge has concluded for another year! Every year starting in November, Brainy the octopus runs a practicing challenge. Students are given a challenge – they must practice something eight times during the week. Challenges are chosen by teacher and student together. If they complete their challenge, they earn the Foodbank one dollar. This challenge lasts for three weeks, so students have the possibility of earning the Foodbank three dollars each. Brainy uses pennies as counters during the week, then exchanges them for loonies at the bank at the end of the challenge. (Octopi get very good exchange rates at the bank!) :

Parents are optionally invited to match donations, so brainy often gets to spend extra on the foodbank food.

This year, students earned Brainy $20 to spend on food for the food bank. He was very impressed. Donations were matched, so he had almost double that to spend!

Brainy likes students to feel included in the shopping fun, so he always makes sure to take lots of pictures. This year, studio friend Puffy the Puffin visited the grocery store with Brainy, taking pictures.

Brainy says thank you to all the students for their hard work this year! They did a great job practicing and earned lots of money for the Foodbank this year.

It was a fun year in the studio!  We started the year with Composer Elections, and in December, we had a practicing challenge.  Brainy the octopus collected food for the food bank for every selection played 8 times during the week.  Students have taken part in the Saskatoon Music Festival, RCM examinations, and studio events.

We had a variety of recitals, including students-only mini-recitals, a visit to a retirement home, and wrapped the year up with the spring recital.  Everyone played well, and I enjoyed hearing the progress students made over the year.

We also collected food for the food bank at our spring recital.  Thanks everyone who brought something. 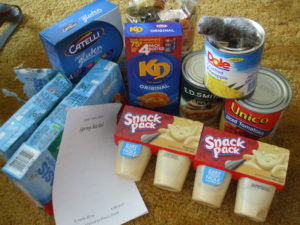 I was involved in a some fun performances this year.   I played with the Saskatoon Symphony Orchestra a few times.  The Bugs Bunny at the Symphony concert was really neat.  The music was tricky, but it was great playing along with cartoons.  I also took part in the Klarinet Kerfuffle.  It was a fun day with clarinettists of all ages taking part.  I enjoyed getting to perform as well as teach a few clinics.

It’s been a fun few months for performing!

In June, I had the pleasure of performing at Gustin House for their “Art and Artists of our Land” concert, featuring Canadian music.  I played a piece called Adagio by local composer Ewan Coxworth.

The same evening, I performed at the Strata Festival.  The piece we played here was Dream Sequence by Janet Gieck.  This piece was commissioned by the Galliard Foundation, a group I am co-founder of, and currently, co-artistic director.  This group recently started their fifth season.  It was a pleasure to play some piano music as a part of the first Classical Variety Night concert of a new year of music making.

The Polyreeds also had some performances recently – we played at Primrose Manor and the Amy McLure place this July.

Thanks to all my fellow performers for these events, it was a pleasure to play with you all, and you were awesome to work with!

The Galliard Foundation is a project I really enjoy being involved in.  This group organizes classical music concerts in Saskatoon.  All ages and skill levels are welcome to perform, which makes them a lot of fun.  It’s fun to see musicians from all over the musical community coming together.

The next concert we’re organizing is on February the eighth and is at 2:00 in the afternoon.  Admission is by donation.  One of the pieces being featured at this concerts is a composition we commissioned by Janet Gieck, a local composer.  You can find out more at the group’s facebook page.